Map of the human microbiome

The Human Microbiome Project has successfully mapped out which organisms are present across different sites of the human body.  An overview of some of the different sites are discussed below. For more information about how the microorganisms in these sites effect human health and disease see: What Your Microbes do for You and The Microbiome and Your Health. 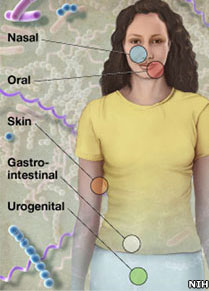 Within the mouth there are several distinct environments which harbor unique microbial communities: the teeth, the gums, the tongue, the insides of the cheeks, the lips, the hard palate, and the soft palate. Connected to the mouth are the tonsils, pharynx, Eustachian tube, middle ear, trachea, lungs, nasal passages, and sinuses. It is estimated that there are about 500-700 species of bacteria common to most oral microbiomes.

The oral microbiome is incredibly dynamic due to the nature of its location. Microbial communities are easily disrupted when people eat, talk, and brush their teeth. As a result, these bacteria have developed several adaptations to colonize and stay put in this environment. One major adaptation is the production of biofilms. In a biofilm, bacteria form a stick surface with other bacteria on surfaces such as teeth. Dental plaque is an example of a biofilm.

As is the case of the human microbiome across all of its sites, the oral microbiome has healthy and unhealthy communities of bacteria that are distinct from each other across all people. The genera that dominate healthy oral biomes include Actinomyces, Streptococcus, Neisseria, Veillonella, Porphyromonas, and Selenomonas.

The skin is a very cold, acidic, and dry environment for microorganisms to live in. Additionally, the skin is constantly shedding itself and the bacteria that live on it. However, it is estimated that approximately 1 billion bacteria inhabit a single square centimeter of skin. How do microorganisms manage to survive in such an inhospitable environment?

While the skin is generally characterized as an inhospitable desert of sorts, it in fact contains a great diversity of environments. Structures such as hair follicles and nails create folds. Different areas along the body produces different types of secretions that spill out on to the skin: sebaceous glands produce sebum that coats the hair, apocrine sweat glands in the armpits secrete fatty substance, and eccrine sweat glands on the palms and soles secrete yet another distinct substance. Other skin characteristics that are variable across the body include hair density, humidity, and thickness of the epidermic and dermis. These factors help to create unique sites across the surface of the human body in which different microbial communities thrive. 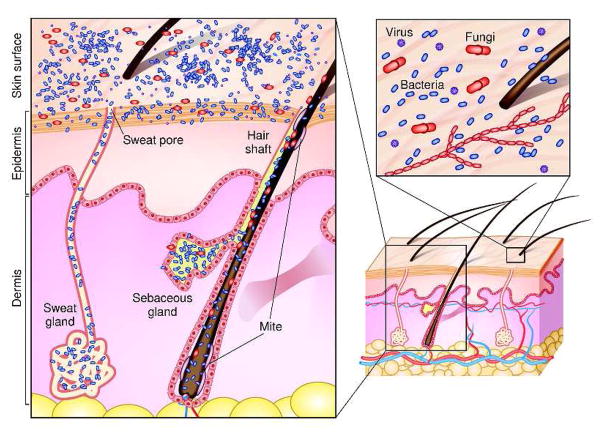 The gastrointestinal (GI) microbiome is an incredibly unique environment. Most of the organisms found in the GI tract are never found living independently outside of their host. Conversely, it is known that humans depend greatly on their GI microbes for normal development and maintenance of homeostasis. The GI microbiome is also unique in the fact that two bacterial phyla dominate almost exclusively: Bacteroidetes and Firmicutes. It is known that both human diet and genetics play a large role in the composition of the GI microbiome.

The dependence of humans on their gut microbes and vice versa  is strongly indicative of co-evolved mutualism. Coevolution is defined as the the influence of closely associated species on the evolution of each. Mutualism is defined as a relationship between two species that is beneficial to both. Many microbes that reside within the GI tract encode genes for the metabolism of compounds. These genes are often not present in the human genome. This means that humans may be relying microbes to breakdown compounds that they are incapable of digesting. In return, many of these microbes rely on their human host to produce nutrients that they are not able to produce themselves.

The organisms which reside within the human GI tract have evolved several unique strategies for dealing with their unusual environment: